Sometimes in life we are forced to make hard decisions… like should I make one large apple pie or individual mini apple pies?  Should I add a scoop (or 2) of ice cream to said pie/mini pies? (Should I operate on this patient or just observe him/her?)  Luckily, I have some amazing friends who help me make these tough decisions (regarding the pie, not operating) and even volunteer to taste test!  So recently when faced with this overwhelming dilemna, individual mini pies won out!

What’s great about mini pies is that they substantially increase the crust to filling ratio.  I don’t know about you, but my favorite part of pie is usually the crust (and depending on the type of pie, the crumble topping, or whipped cream, or chocolate, or…you get the point: pie is just kinda awesome).

These mini pies take things a step futher by adding a crisp topping and finally drizzling with icing.  For those who cannot decide between eating apple pie and apple crisp, this is your answer.  I definitely plan to keep this recipe in my arsenal for future fruit pies (there are endless possibilities with just minor changes to the recipe).  Enjoy!

(males about 18, recipe adapted from Girl versus Dough)

To make the pie dough: Combine flours, sugar and salt in a food processor . Add butter cubes and pulse until the mixture resembles coarse crumbs.

Pour ice-cold water into mixture in bowl; pulse until a rough dough forms.

Turn dough out onto a countertop and knead a few times until dough comes together; divide in half and shape each half into a ball. Flatten each ball into a 1-inch thick disc. Cover tightly with plastic wrap and chill in fridge 1 hour.

Meanwhile, make the crisp topping: In a large bowl, combine oats, brown sugar, flour, cinnamon and salt. Cut in butter with fingers and mix until well combined. Alternatively, you can do this in a food processor by pulsing all the ingredients until combined.  Chill mixture until pie dough is fully chilled and ready to bake.

When pie dough is fully chilled, sprinkle a countertop generously with flour, then roll out each pie dough disc to a rough ⅛-inch thickness. Use a 4-inch round biscuit or cookie cutter to cut out dough rounds; re-roll scraps one time to cut out more rounds (you should end up with about 18 rounds). 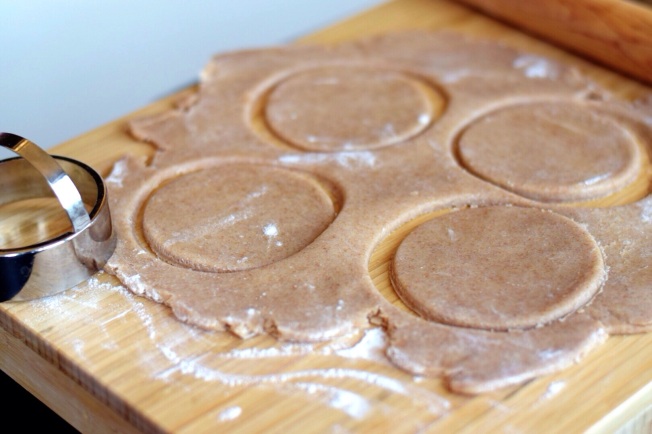 Press each round into the bottom and sides of an ungreased muffin cup.

Divide apple filling among muffin cups (the filling will be a bit mounded, but it’ll bake down). Sprinkle tops evenly with oatmeal cookie topping.

Bake 40 minutes until topping is golden brown and pie crust is baked through.

Cool mini pies in muffin cups 30 minutes, then use a butter knife or spatula to carefully transfer pies to a cooling rack to cool completely. 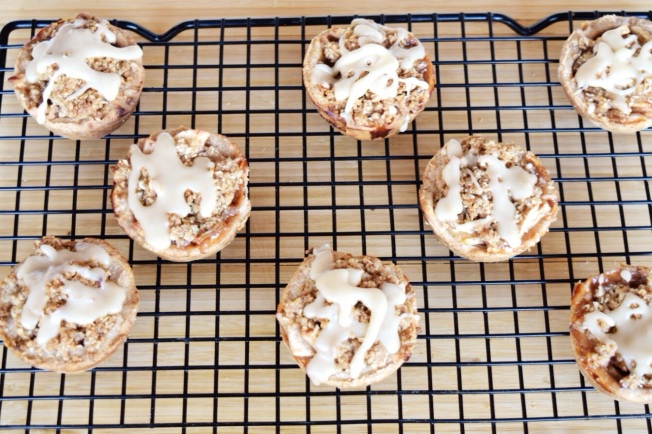