Despite the balmy 80 degree weather this weekend in New England, fall is upon us.  And with it comes apple picking, pumpkin everything, and the Jewish high holidays.  While no one really looks forward to Yom Kippur (although it is fun to stuff your face with bagels and lox after 24 hours of fasting…and I suppose to pray and ask for forgiveness), Rosh Hashanah is always an exciting holiday.  Rosh Hashanah is the Jewish new year and also the anniversary of the creation of Adam and Eve.  There are a lot of religious customs but what most people remember and look forward to is the tradition of eating apples dipped in honey to welcome in a “sweet new year”.

While the main event of this holiday is praying and reflecting at synagogue, blowing the shofar, and beginning the first of ten days of repentance, the celebratory meal often takes central focus.  I have been hosting Rosh Hashanah dinner for the past several years for my busy co-workers and friends who often don’t have time to make it to a synagogue or celebrate the New Year.  It’s a way to get my close friends together to celebrate Rosh Hashanah in our own way (with good food!).

Scroll down for pictures from this year’s dinner along with some recipes.  L’shanah tovah! 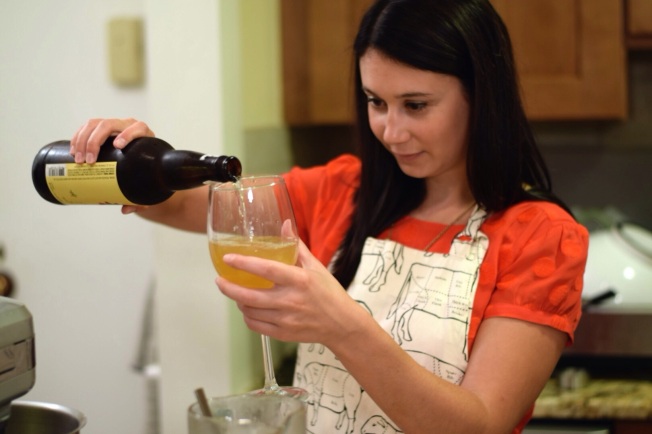 (This recipe is from my childhood best friend’s mom, you won’t find a better challah around!)

Add the first 6 ingredients into a bread machine in order listed. Make a hole in the top of the flour and add the yeast. Set bread machine to dough cycle (approximately 1 to 1.5 hours depending on the machine). Take out dough and place on well floured surface. Punch down the dough several times and then make into 3 ropes. Braid the challah and place on greased baking sheet. If you want to make apple and honey challah then roll challah into one long rope, flatten and stuff with a mixture of apples, honey and cinnamon.  Roll into a bun shape.  Cover challah with towel and let rise for 1-2 hours. Beat egg and paint onto challah. Sprinkle with sesame seeds if desired. Bake in preheated 350˚F oven for 30-40 minutes or until golden brown. 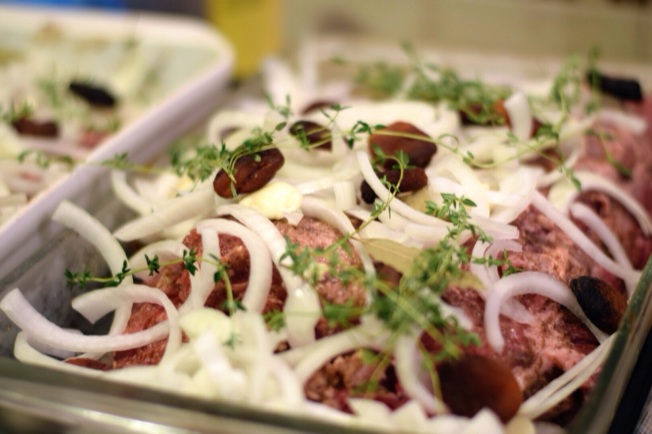 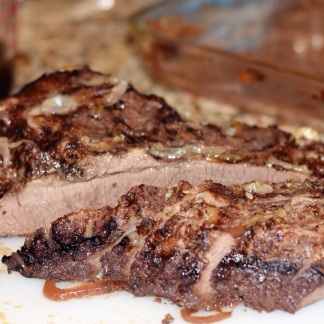 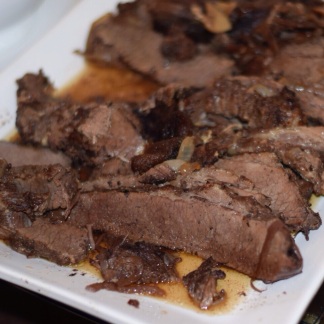 Recipe for spiced brisket with apricot and leeks.

I have been making this recipe for almost 8 years and it is always a hit!  I’ve found that it is best to start it 2 days ahead of time and cook it the day before- leftover brisket always tastes better!

Now to the desserts… 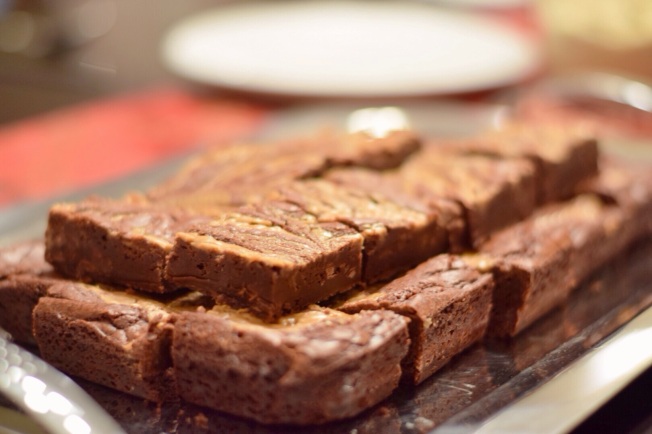 Rich and fudgey brownies with peanut butter, proclaimed by some to be the “best brownies in the world”!  I cut the recipe by half and make it in a 9×13 inch pan.  Be careful not to over bake! 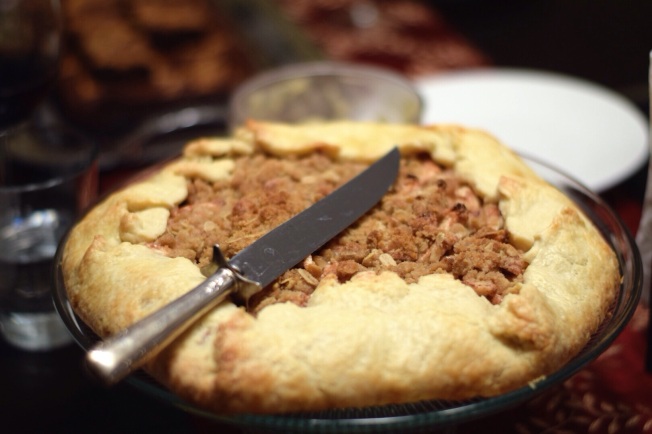 (from the Kosher by Design cookbook)

In a food processor, pulse flour, salt, and sugar 2-3 times until mixed.  Add the diced, chilled butter.  Pulse until mixture resembles peas.  Add the ice water 1 Tbs at a time until the dough comes together.

Turn dough out onto a piece of plastic wrap or parchment paper.  Knead briefly to bring together in a ball and flatten slightly into a disc.   Refrigerate for 30 minutes in the refrigerator.

In the meantime make the streusel by combining all ingredients in a small bowl and mixing with a fork until it comes together.  Set aside.

Peel, seed and slice the apples.

In a large bowl, combine the apples, flour, sugar, cinnamon and salt.  Toss gently to coat.  Set aside.

To assemble the crostata:

Preheat the oven to 375.  Remove the dough from the refrigerator and set on a lightly floured piece of parchment paper.  Roll the dough into a 14-15 inch circle.

Leaving a 3 inch border, spread the apricot preserves over the center of the dough.  Sprinkle evenly with 3/4 of streusel topping.  Next, starting at the outer edge and working your way into the center, lay the apple slices in concentric circles, going around and adding layers until the apples are used.  Sprinkle with remaining streusel.  Using the parchment to help, fold the dough border over the apples, turning as needed.  The dough will cover 2-3 inches of filling.  Slide crostata carefully on the parchment paper onto rimless baking sheet.  Brush exposed dough with beaten egg yolk.

Bake for 25 minutes.  Remove from oven and carefully cover dough with foil to prevent burning.  Bake for another 20-30 minutes until crust is golden brown and apples are tender.  Let cool for about an hour before cutting and serving.

And finally, what to do with leftovers.. 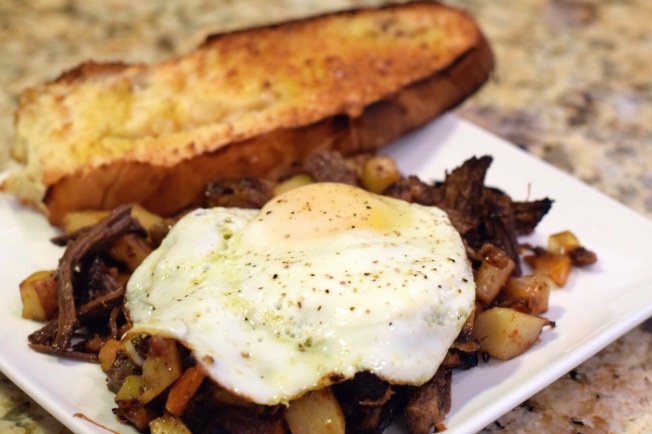 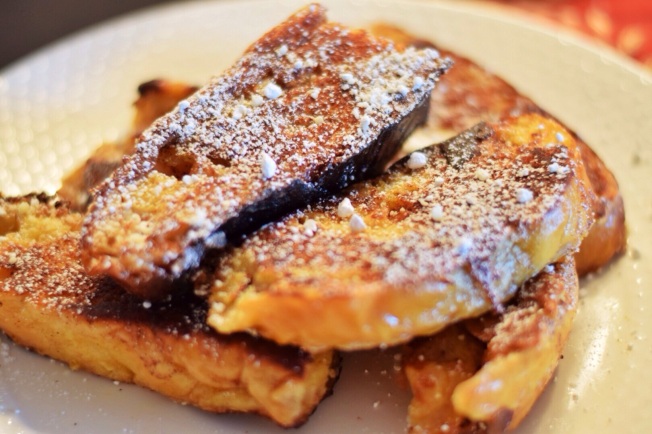 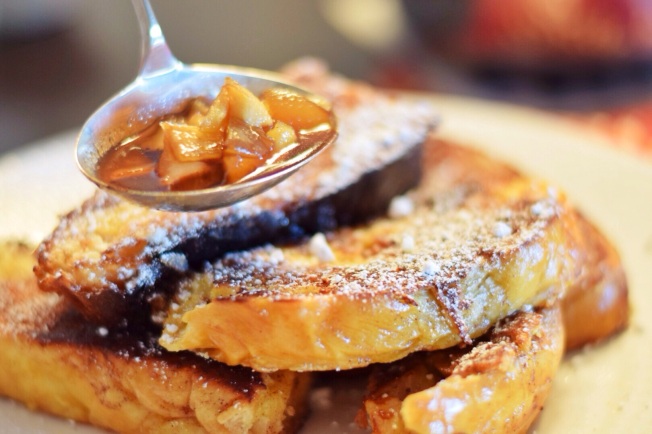