Shana Tova!  This past Wednesday evening marked the beginning of Rosh Hashana- the Jewish New Year.  This day is also known as the “Day of Judgement” when 3 books of account are opened: One for the righteous who are immediately inscribed into the book of life, one for the wicked who are cast out of the book of life forever, and one for the indeterminate who are given 10 days to reflect and repent until final judgment on Yom Kippur.  Despite the serious undertones of the holiday, I fondly remember Rosh Hashana as a joyous holiday full of celebration, shofar (a musical instrument made of out of a horn) blowing, brisket, and of course apples and honey.  It is Ashkenazi custom to eat apples and honey on Rosh Hashana to welcome in the sweet new year. 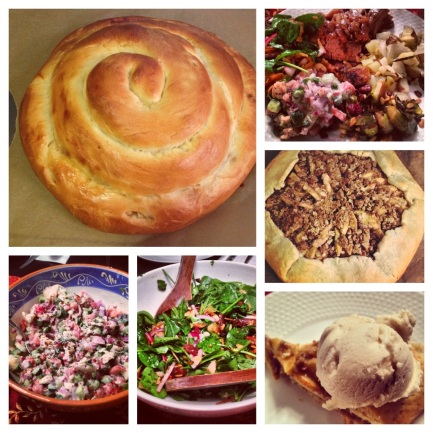 Despite my crazy vampire schedule at the hospital (I am once again working the night shift), I was determined to make Rosh Hashana dinner for my friends.  It was a big undertaking: brisket (for 10 people), roasted potatoes, 2 challahs (one regular braided challah and one round challah with apples and honey in the tradition of Rosh Hashana), an apple tart and chocolate peanut butter brownies.  I was debating buying plain, vanilla ice cream to go with the apple tart since I was already pushed for time, but last minute I had a brilliant idea and a burst of energy! The result?  Honey ice cream!  Although ice cream sounds difficult to make, I think I’ve proved that it really only takes a few ingredients and a little time and then the ice cream machine does the rest of the work.  Once the idea of honey ice cream was in my head, I couldn’t ignore it.   I decided to take the Jeni’s Splendid Ice Cream base and substitute honey for the sugar.  I wasn’t sure how this would affect the texture but decided it was worth a shot…and it was!  It was deliciously smooth and creamy and paired perfectly with the apple tart for a sweet start to the new year. 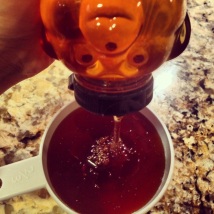 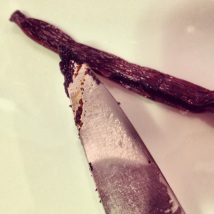 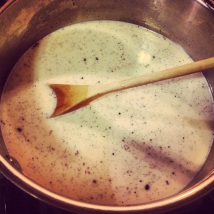 Prep
Mix about 2 tablespoons of the milk with the cornstarch in a small bowl to make a smooth slurry. Whisk the cream cheese and salt in a medium bowl until smooth. Fill a large bowl with ice and water.

Cook
Combine the remaining milk, the cream, and honey in a 4-quart saucepan.  Scrape the seeds of the vanilla bean into the mixture and then add the bean.  Bring to a rolling boil over medium-high heat, and boil for 4 minutes. Remove from the heat, and gradually whisk in the cornstarch slurry. Bring the mixture back to a boil over medium-high heat and cook, stirring with a rubber spatula, until slightly thickened, about 1 minute. Remove from the heat and remove vanilla bean (carefully).

Chill
Gradually whisk the hot milk mixture into the cream cheese mixture until smooth. Pour the mixture into a 1-gallon Ziploc freezer bag and submerge the sealed bag in the ice bath. Let stand, adding more ice as necessary, until cold, about 30 minutes.

Freeze
Pour the ice cream base into the frozen canister and spin until thick and creamy. Pack the ice cream into a storage container, alternating it with layers of honey drizzle (as much or as little as you want); do not mix. Press a sheet of parchment directly against the surface, and seal with an airtight lid. Freeze in the coldest part of your freezer until firm, at least 4 hours.