I have been wanting to make this ice cream for a really long time. The first time I had corn ice cream was at Olive’s in Charlestown (RIP) served on a berry crisp. I was initially a little skeptical of corn ice cream but was soon proven wrong. With the sweet corn flavor, it is slightly reminiscent of cornbread, but in a cold, smooth and creamy form. Paired with tart berries it’s the perfect combination.

This recipe is from Jeni’s Splendid Ice Creams. For those who haven’t tried her ice cream, you are missing out. James Beard Award winning Jeni Britton Bauer has been making delicious flavors, such as salty caramel, goat cheese with red cherries, and sweet corn, since 2002. While her shops are located in Ohio (and one in Tenessee), her ice cream can be found at many national grocery stores (locally can be found at Savenor’s, Formaggio Kitchen, and South End Buttery) and even ordered online. Now that corn is coming into season, this is the perfect summer ice cream! It’s especially great on berry pie (see last post). 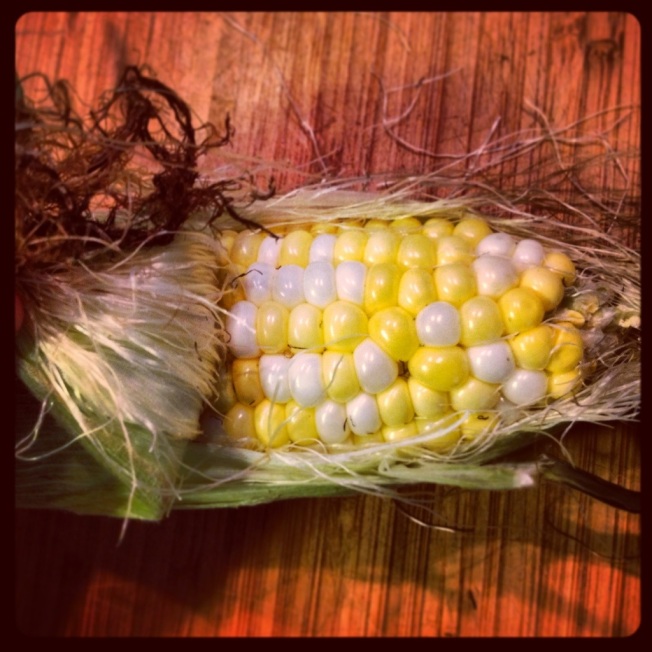 In a bowl, stir together 1/4 cup milk and the cornstarch; set slurry aside. Cut kernels off cob of corn and cut cob into large chunks; reserve kernels and cob together. In a 4-qt. saucepan, whisk together remaining milk and the cream, sugar, syrup, and salt; add corn kernels and cob and bring to a boil over medium-high heat. Cook for 4 minutes; stir in slurry. Return to a boil and cook, stirring, until thickened, about 2 minutes. Pour mixture through a fine strainer into a bowl and discard corn solids.
Place cream cheese in a bowl and pour in 1/4 cup hot milk mixture; whisk until smooth. Then whisk in remaining milk mixture. Pour mixture into a plastic bag; seal, and submerge in a bowl of ice water until chilled. Pour mixture into an ice cream maker; process according to manufacturer’s instructions. Place into a storage container and freeze at least 1 hour before eating.