Chocolate and peanut butter, peanut butter and jelly, peanut butter and fluff…classic, time tested flavor combinations that will never fall out of favor. However, none of these come close to the creamy chocolate-hazelnut combination of Nutella. This genius (in my opinion) concoction was invented in the 1940s by Pietro Ferrero in Italy when he was forced to stretch the rationed supply of chocolate with chopped hazelnuts. (This is reminiscent of how red velvet cake came to be- bakers would add beet juice to cake to give it a darker color when chocolate supplies were scarce.) It was initially called “Pasta Gianduja” and then renamed “Nutella” in 1964. Since then, it has gained mass popularity in the US and around the world. There is even a “National Nutella Day” on February 5th! And Nutella was recently in the news when thieves in Germany stole 5 tons of it earlier this month.

My introduction to Nutella was in the form of crepes, filled with nutella and bananas or strawberries. However, in the past several years I have experimented with Nutella ice cream, Nutella quesadillas (2 flour tortillas with nutella and marshmallows in between, heated in a skillet until tortillas are lightly browned on both sides and marshmallows are melted), and more recently Nutella cupcakes (pictured below, recipe at www.baked-in.com).

My mom recently got me over 3 pounds of Nutella (not quite 5 tons but still a large amount) at Costco, so I needed a recipe to use it up (to deter me from just eating it by the spoonful from the jar). I’ve made a lot of cupcakes recently so I decided, instead, to make a cake. This is a chocolate cake flavored with hazelnut liquor, filled with a Nutella chocolate ganache, and covered in a Nutella swiss meringue buttercream (from the Nutella cupcakes pictured above). Before I continue on with the recipe, let me leave you with two disclaimers:

Disclaimer #1: This frosting recipe makes more than what is needed for the cake and I cannot be responsible for what is done with the leftovers (there might be a Nutella frosting food coma involved)!

Disclaimer #2: Despite some recent commercials touting Nutella as the key to a nutritious and healthy breakfast, Nutella unfortunately, is not a healthy chocolate spread. Apparently there’s actually a lawsuit surrounding this issue…but seriously, chocolate, hazelnut, palm oil- did someone really think this could be good for you?

Grease two 8″ cake pans (with butter or cooking spray) and line bottom with parchment paper (trust me, you’ll regret it if you skip this step).

In a bowl, stir the flour, baking powder, baking soda, and salt together until blended. Add the flour mixture to the chocolate mixture and whisk until smooth. Let the batter sit at room temperature for at least 1 hour to thicken. Or, cover and refrigerate for up to 3 days. When ready to bake, preheat the oven to 350F. Divide batter evenly into the 2 pans. Bake for 20-25 minutes or until the tops spring back when pressed lightly with a fingertip and they pass a toothpick check. Cool completely on a wire rack.

Place chocolate in heatproof bowel. Scald heavy cream in a small saucepan over low heat. Pour cream over chocolate. Whisk until chocolate is thoroughly melted and combined. Mix in Nutella until combined. Chill for about 1 hour at room temperature (or 30 min in the refrigerator) until ganache is thickened but still spreadable.

Fill a medium saucepan with about 2 inches of water and bring to a simmer over medium heat. Whisk egg whites and sugar together in the bowl of a stand mixer. Rest the mixer bowl over the saucepan, whisking constantly until sugar is completely dissolved and the mixture is thick and glossy (note: to completely pasteurize the egg whites, they must be heated to 140 degrees).

Remove mixer bowl from heat and place on stand mixer. Using the whisk attachment, beat on high speed until cooled and the egg whites hold stiff peaks, about 8 minutes. Switch to the paddle attachment and add the butter two tablespoons at a time. Beat until fluffy and smooth, about 3-5 minutes, or longer if necessary. (It may during this process become a curdled, soupy mess, but just continue beating, and it will come back together.) Add Nutella and beat until fully incorporated.

Once completely cooled, remove chocolate cakes from pans. Set first cake on cake stand (or plate, etc) and remove domed top with a serrated knife to even it out and create a flat surface. Spread ganache evely over the surface. Next spread a thin layer of Nutella buttercream over the ganache. Place the second cake on top of the ganache/frosting filling. Apply a crumb coat (thin coat of frosting to pick up all the crumbs so that when you place the second coat, you get a nice even frosting with no crumbs). 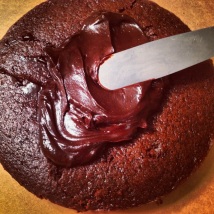 Refrigerate for 30 minutes. Apply your final coating of frosting making sure to cover the top and sides completely. You may then pipe on a decorative layer around the edge. If not eating immediately, the cake should be refrigerated. Take out for at least an hour before serving to bring to room temperature.

5 thoughts on “A spoonful (or a cup) of Nutella: Chocolate Cake with Nutella Chocolate Ganache and Nutella Buttercream”

sugaredscapes
Evolution of a female surgeon
Sip, Sear, and Sizzle

The Adventures of a Fat Kid. From Bacon to Beer and Everything in Between.